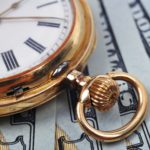 In clocks with Roman numerals it is not uncommon to see the number four represented in different ways, but… what’s the proper way, IV or IIII? There are several possible explanations for the different choices of different brands and types of watch!

The first formula is composed by four arms (IIII) and the representation is performed as an addiction (1 + 1 + 1 + 1), while the second (IV) is obtained by difference (i.e., one less than five). In watches, usually, the first form is preferred (IIII), although this is not the best known and studied. There are several reasons leading to represent the number four in this way:

– Historical: the historical reason concerns the Roman numbering system, which only used the bar lines, preferring a single additive system to the additive-subtractive, which was introduced in the Middle Ages.

– Religious: the Romans could not use the form “IV” to represent the number four because it coincided with the initials of the Latin name of the god Jupiter (Ivipeter).

– Social: with the introduction of the meridians, the representation of four in additive format made the act of reading the time a lot easier for uneducated people.

– Economic: preferring the IIII form allowed a saving from the economic point of view, during the realization of the components to be applied on the dial. Thanks to this optimization, the waste of materials and resources is reduced to a minimum.

– Aesthetic: the use of the additive form could also provide an aesthetic balance, where in a compound number of four signs (VIII) opposed a number composed by the same number of components.

For more curiosity about watches and their history – or if you want to order custom pointers for your products – please contact us! Whether you prefer the number 4 expressed in additive or subtractive way(IIII or IV), you can just choose which type of hand is best suited to your face, to create an unique design watch!